Yet another month of lockdown and yet another post! In fact, this comes in a little later than I thought I would be able to manage… too many things happening and too little time in hand! After my last post on walls, which was unexpectedly well accepted by the handful of readers that I have, I have been inspired/suggested to write on more ways in which “Walls” feature in our lives. Ideas and thoughts poured in along with photos from personal archives. I, however, continued to look for appropriate photographs to express what I feel and as always, the Worldwide Web did not disappoint me. Thanks to the thousands and thousands of creative people who remain to be my inspiration.

Through my last post, I have tried to emphasize how walls have acted as live canvases for expressing thoughts, messages, dissent, support or agenda since men realised its true potential in spreading the word around. However, this time around, it is more of a story. A journey of how walls started etching the story of mankind and how even in its most ancient form by etching the story of man’s progress from being ruled by nature to trying to rule nature. Today, we begin at the very beginning, move through man’s journey through life and stop where life stops

For all those who have been into Game of Thrones, do you remember the cave paintings Jon Snow showed Daenerys deep down inside the caves of Dragonstone – the cave paintings of “First Men” who etched their tales in rocks that later helped them understand the mysteries of life? It is a wonder how caves found in almost all ancient civilizations of the world have documented stories of how men came to their more sophisticated state through centuries and more of internal and social conflict. From India to Egypt to Bulgaria to Africa, for those who know what a storyboard is, such relics are the storyboards of time! And what better canvas to capture them all, but walls?

And while caves were the first choices even before paper was invented, they have remained our first choice as we learn to scribble our fist alphabets. So, it doesn’t just stop at cave walls, walls at home have also often been found to have been adorned by meaningless, formless scribbles, alphabets or numbers written in novice handwriting, or height measurement charts till a kid grows beyond measure! While a fresh coat of paint can clean up the “mess” some do prefer to keep them as happy memories!

Stepping out of our homes, In India, we have always used outdoor and pubic walls as advertisement boards, irrespective of the region or the purpose. And walls that have a “Stick No Bills” written on them, somehow seem to be more vulnerable to such attacks. So, be it an ad for a PG, job or a product, be it a “missing” or a “wanted” poster or even a movie poster for a localised version of an international film, walls seem to be the most lucrative spots for putting up adverts. And then who can ever ignore a good sound piece of advice by the famous Dr. D K Lodh. And when billboards and vinyl fail, we head straight for the walls… particularly in rural areas or smaller cities do we see walls shouting out Ultratech Cement or Coca-Cola, or just about anything! And then how can we miss the obvious love notes and telephone numbers scribbled on Indian Railways coaches! I wonder if this happens only in India! 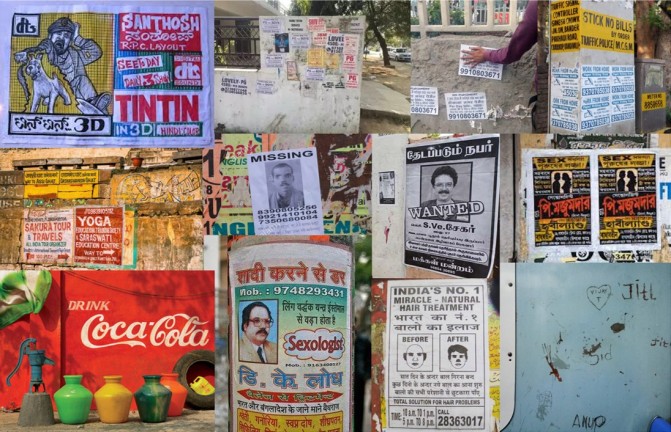 But walls don’t always have just happy expressions… ironically, mentally disturbed, and oft labelled schizophrenic, individuals have been found to use walls creatively, often to share what the world refuses to hear from them – be it on the walls where they are confined or wherever they get a little space.

The drawings on the wall on the left are by the Rat Man (real name Doug Rattmann), a schizophrenic former employee of Aperture Science who was convinced GLaDOS would continue to try to kill Aperture employees with a deadly neurotoxin. Such cases can be found galore and even within the confines of a room. Rabindranath Tagore had an older brother – Birendranath, an expert mathematician who was believed to have lost his sanity to his genius. Although there are no remaining pictures, the walls of the room where he was kept captive were reported to have been full of complex mathematical formulae and deductions, scribbled in charcoal. Walls have also been the voice of prisoners, deserved or undeserved… Whether they mock a skewed system, or they count the days of confinement, these writings on the walls have remained silent testimonies of their sufferings long after the writers might have gone!

If the irony of these prison wall scribbles makes you wonder what might have been going through the minds locked up here, the next few walls will perhaps just leave you with more questions. After al,l that is what we are left with when the story of our lives gets etched on walls one last time, way before they ideally should!

3 thoughts on “Writings on the wall…”

I am an explorer... I might not be able to physically travel to different places, but my books and my dreams take me all over the world! And finally I have the opportunity! And here I am...sharing my experience and thoughts! View all posts by Sanchari